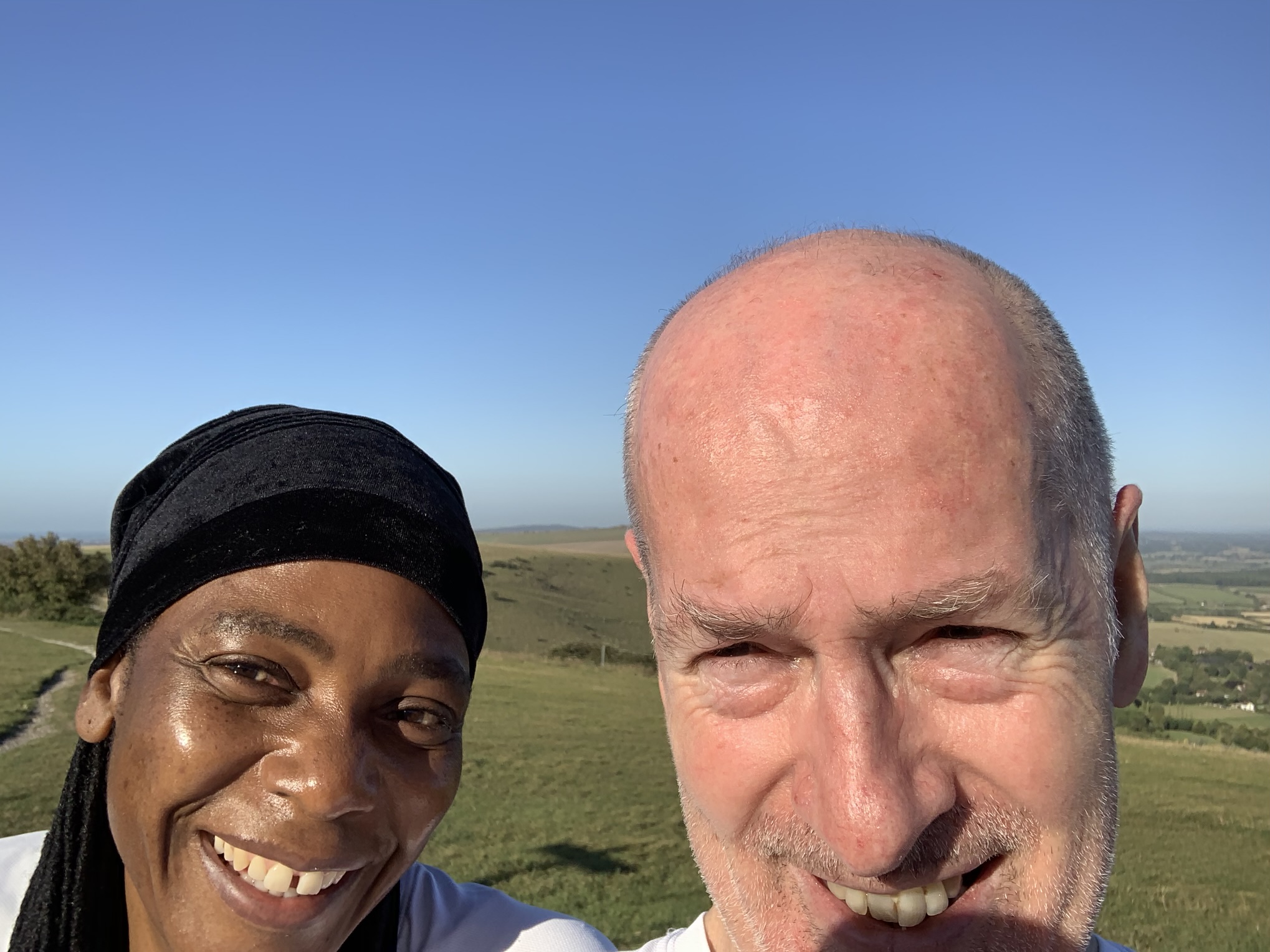 The ZHRO walk for freedom started on Saturday 21st September 2019 at 6:30am at Brighton Pier. The end point was Hampton Court Train Station at 8:55am on Sunday 22nd September 2019. The first leg was started by Rashiwe Bayisayi and John Burke. They walked out of Brighton and up to the South Downs at Devil's Dyke [Photo: at the top] and then, all the way to Christ's Hospital Rail Station, where they took a break after the difficult 37 km stretch but, John Burke announced that he was pulling out with foot trouble.

The two sisters bravely walked all the way to Guildford Train Station, setting off around 4:00pm. At around 10:30pm and completely dark, the two sisters walked into Guildford train station car park. They were visibly tired and Rashiwe Bayisayi had a limp. “will you be able to complete the walk? With a real tone of concern John Burke asked. “I will try and walk through the pain and take it easy.” Replied Rashiwe Bayisayi.

It was at this point the Sarah Bayisayi decided she could not continue. “I have done over 30km without training,” she said. After a short break and further help from Chipo Parirenyatwa, Rashiwe Bayisayi got on with the night time walk. 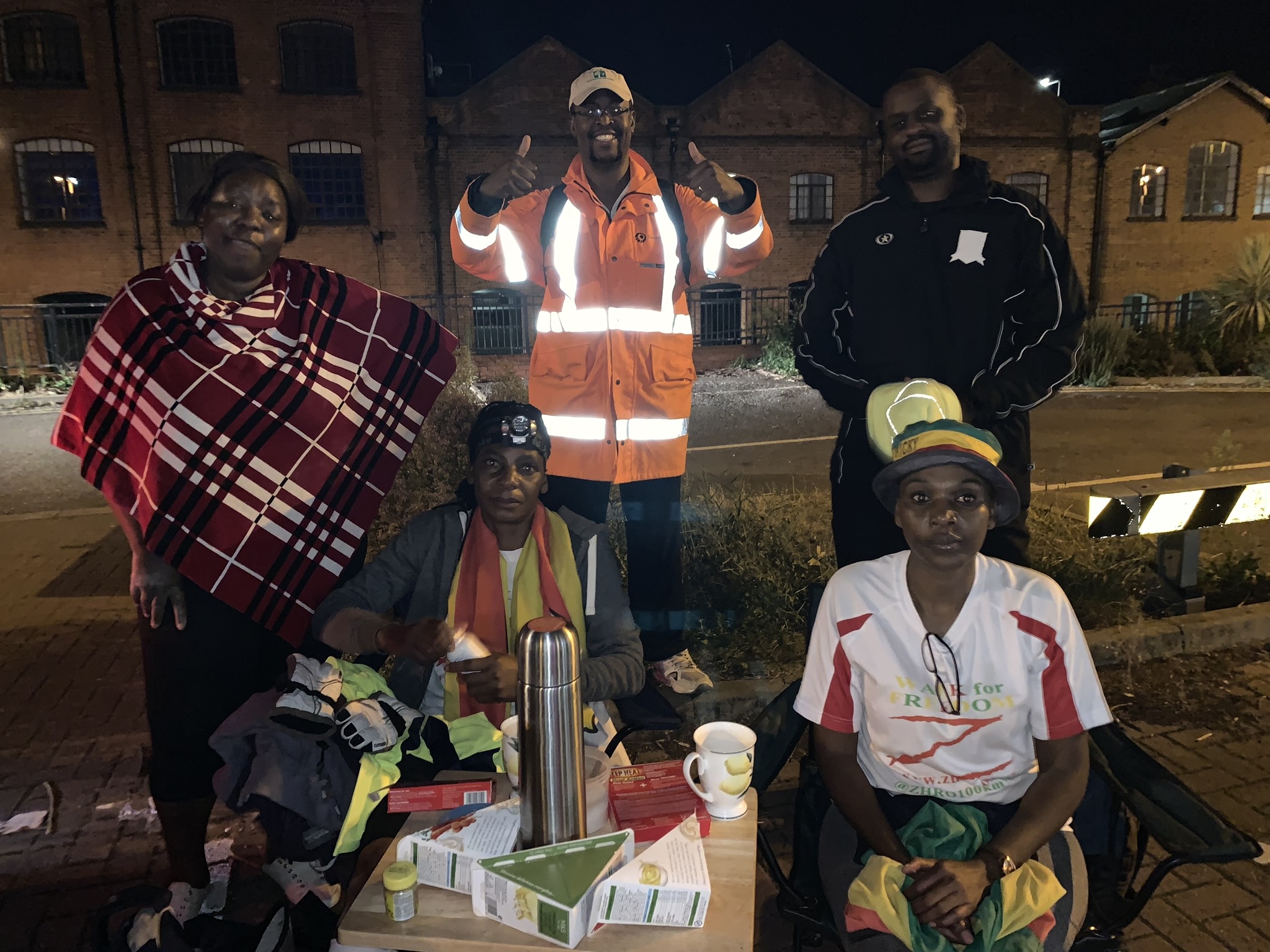 Rashiwe was Joined for the night walk by, Tinashe Aliseni who had a powerful front torch, and Thabo Makuyana who was wearing a bright orange florescent jacket. [Photo at Guildford Railway Station]. The three set off and started the leg from Guildford train station to Hampton Court Train Station. The trio walked through the night and stopped twice for refreshments from the support team - the first was at The Anchor Pub [car park] at Pyrford Lock at 3:40am. The leg was made especially difficult by the fact that they were walking near the river and the path was extremely narrow sometimes, thus, “we had to walk like as if we were walking on a tight-rope,” said Rashiwe Bayisayi.

As dawn broke, Thabo Makuyana declared that he was dropping out at the final rest stop at Walton-on-Thames around 6:30am. Rashiwe Bayisayi and Tinashe Aliseni literally soldiered on and got to the finish line together and they were very, very tired. Rashiwe Bayisai successfully completed the full 105km distance in 26hours. Thus the record of 25 hours which is currently held by Rashiwe Bayisayi still stands.
“The pain I am feeling (in her knee) is more or less the pain that people in Zimbabwe are suffering…. I said, we will never stop doing this walk, as it is walk for freedom, until Zimbabwe is free. Now Zimbabwe is not free, so we continue to endure the pain.”

Tinashe Aliseni then added saying, “The night walk was a bit more painful, but its like she said, until, Zimbabwe is free, we keep doing it (The Walk for Freedom). Medals were handed to the participants for taking part. It was suggested that a special shield should be created for Rashiwe as this was her THIRD consective completion of the 105 km Walk for Freedom

Planning for next year (Vision 2020 - Walk for Freedom) has already started.