For those ZHRO members in the North, we organised a circuit based from Pickering, North Yorkshire. [YO18 7AS post code for the Eastgate Car Park as the meeting point.]. It is however, a long way from ZHRO's base in Worthing [300 miles away!]. 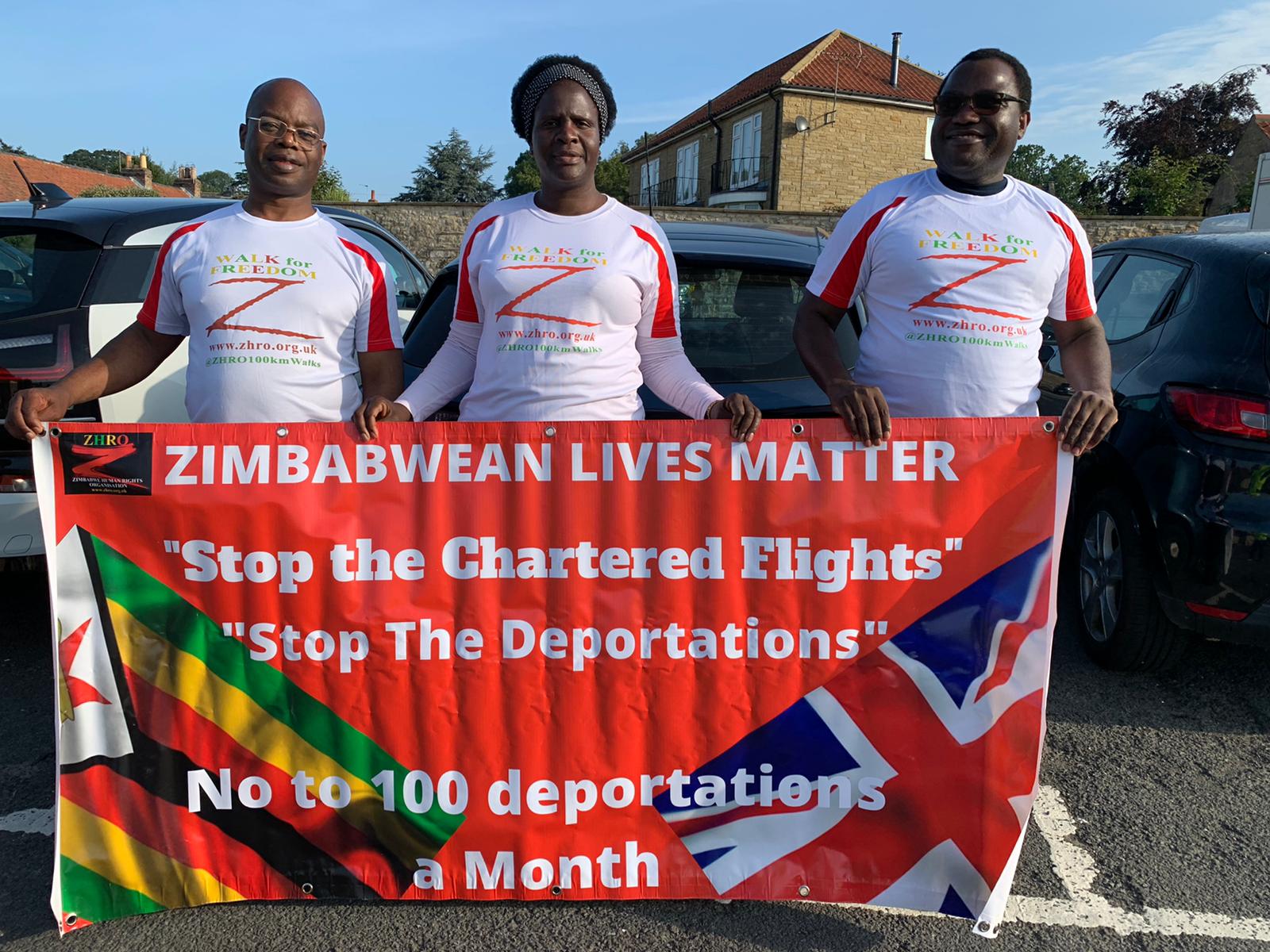 So an over-night stay in Leeds was needed, and an early start to pick up Leeds Branch members, Hillary, Sipilien and Mevis. [7:20am near Leeds Market] - then onto the A64 to York, and Pickering. The Stat-Nav had decided to 'avoid motorways' etc and so took us past Castle Howard, North Yorkshire - very impressive [see more detail via the link]. So we arrived in Pickering at 9:15am. Moses and Daisy were driving down from Newcastle to take part - but got held up in Traffic. So the 4 of us from Leeds got started at 10:00am [see the Flickr Album linked here]. We re-directed Daisy, Moses and their two children to our meeting point at Lockton, some 10 minutes north of Pickering [on the A169] and we intended to meet them there, and then all continue together.

Due to this being a "d 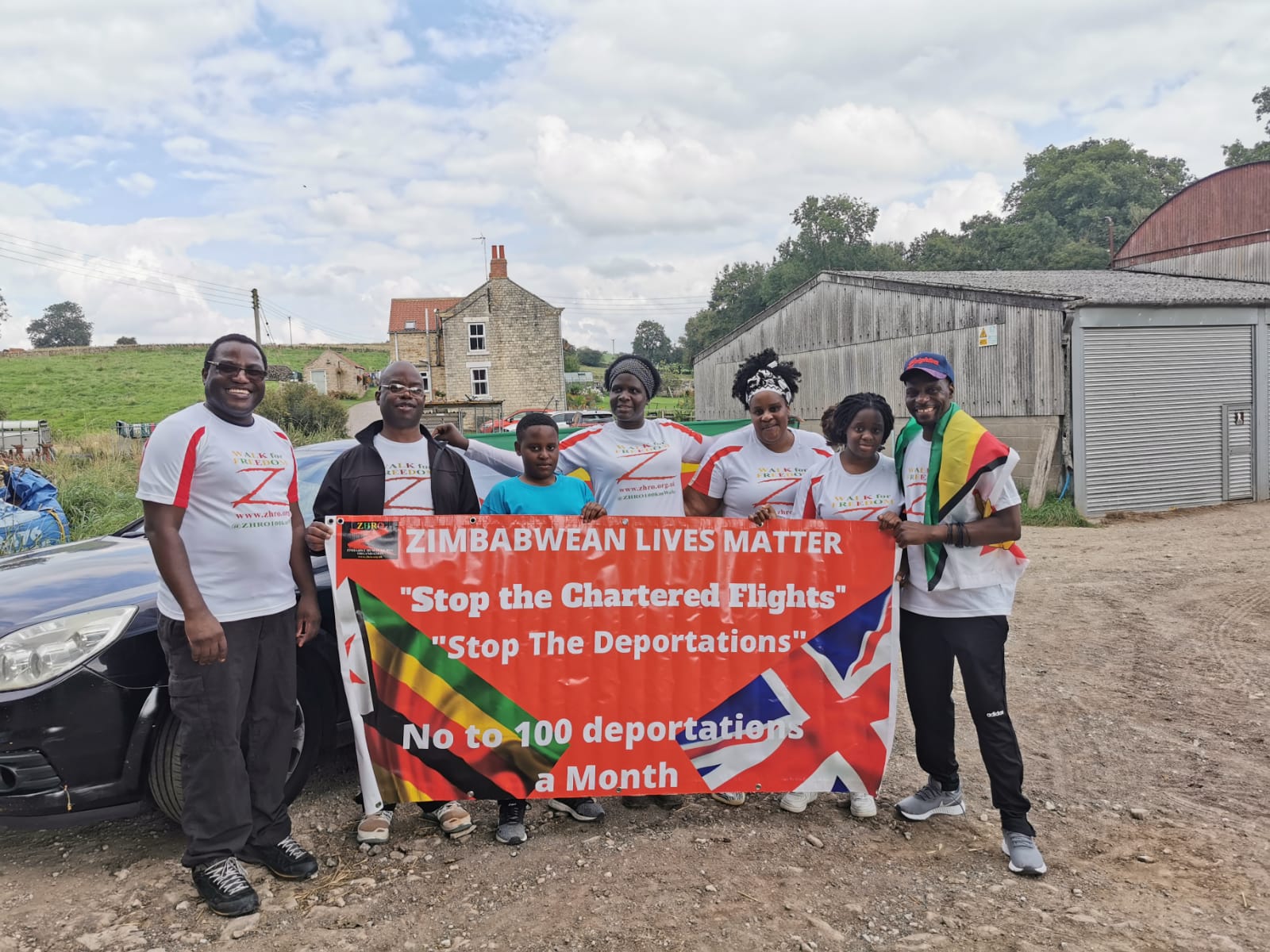 esk-designed" Walk [for Freedom], we encountered a few route issues around noon - [ending up the wrong side of the river etc] - so Myself. Mevis and Sipilien ended up climbing a particularly steep bank - sometimes on all fours! The implication was that we needed to re-route Moses, and Daisy [again] to "Kingthorpe Farm, which was closers- as a meeting point. We all met there, Including Hillary in his electric car around 1:00pm. Photos were taken  - and 'Brian' the Farmer came out to see what we were all about - as we were all wearing the same "Walk for Freedom" T shirts. So we do, in fact, manage quite a few 'engagements' with the public on these Walks - so we are able to 'educate' many people about the problems in Zimbabwe, combined with the antagonistic 'stance' of the Home Office.

So from Kingsthorpe Farm the happy band all set off together, seeking out the route from the "theroretical plan" and realising how 'hidden' some of the markers and ways points can be. Some being so difficult to spot - that our guide was the OS Map App  - using the route planned out last year.

We arrived at Lockton at around 4:00pm and had a cup of tea {Tetley Tea bags - now a TATA Company product!]. Well done Daisy for bringing a big vacuum flask of hot water. Daisy even got that re-filled by one of the villagers.

So the next phase of the walk was started with Moses, Sipilien, Alwyn and Hillary. We did our best to help them use the OS Map App to navigate to the view point at the Hole of Horcum. Myself, Mevis and Sarah had decided that we would go [by Car] to the next leg of the route - the weather was a little too hot - and all those hill climbs had taken their toll on our legs and feet.

It was also logical to bring the car up from Pickering and park them at the view point at the Hole of Horcum.

Due to some mis-navigation the intrepid walkers ended up at the bottom of the Hole of Horcum [rather than to actually planned route at the top of the hills]. This left the hardest slog at the very end of their journey when they were the most tired. But with the help of a Spanish drone 'pilot' and his partner, Hillary and Sipilien finally arrived at the view point car park to complete once again out troop of Walkers - along with our Sanish hero! By now it was 7:00pm, so any continuation of the walk would have meant walking in the dark - something not recommended for a first time route exploration. The sun was setting by now and the walking troop plus friends said their farewell at 7:30pm and headed North and South to their respective homes.