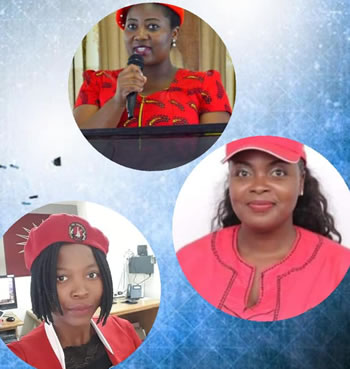 The blood thirsty Zimbabwe Junta Government, led by the human blood drinking leader of the New Deception and leader of the European Blacklisted as a Terrorist or money Laundering organisation, Zimbabwe African National Union Patriotic Front (ZANU PF), Emerson Mnangagwa (AKA by ZHRO Mai Putsai) has stuck again, with his brutal hands.
The 3 (three) Female MDC members, include one young female MDC Member of the Zimbabwean Parliament called Honourable Joanna Mamombe.  Joana Mamombe is missing, assumed abducted along with Sicilia Chinembiri and Netsai Chitore
Some of the allegations made are that after their arrest, they were taken away in an unmarked car.  The fears that most online commentators have made include, fears that the treatment Jestina Mukoko and Gonyeti aka Samantha Kureya received when they were abducted is likely going to be metered out to the three abducted women, if not worse.
The Zimbabwe Junta has got form in the abduction, torture and execution department.  Over the 40 years of ZANU PF's failed rule of Zimbabwe, since independence, a multitude of Women have suffered at the hands of this Regime and its State and non State proxies.  Bones of human remains have been found all over Zimbabwe by various organisations investigating abductions, summary executions and torture. Zimbabwe has not signed and ratified the treaty against abductions,
A point to note is that, the women were initially arrested for protesting because of a lack of food, social security support and rampant kleptocratic corruption running through the entire ZANU PF led Government, which has been accused of squandering COVID-19 donations, playing politics with food distribution that is not from the Government and not caring for the rights of Women who are currently baring the brunt of domestic abuse in Zimbabwe, without reprieve from even the police who meant to protect and serve.

Earlier on Thursday, Rosely Hanzi of the Zimbabwe Lawyers for Human Rights said they were yet to locate the three MDC Alliance youths. Hanzi said:

Very sad that state has a penchant of misdirecting a lot of energy, resources, time violating rights rather than comply with Constitution and investing more energy, time and resources fighting COVID-19.
With ZHRO not being able to protest outside the Zimbabwe Embassy at the moment, the ZHRO membership and the ZHRO leadership, are sending a clear message to the junta regime, that ZHRO is watching and is planning to a series of protests like no other if the junta does not respect the rights of Zimbabweans.
From a fundamental Human Rights Perspective,  and from a Moral perspective the safe return of the ladies is an absolute imperative.  Thus far, on Twitter @euinzim, @CanEmbZimbabwe, @ZLHRLawyers and @USEmbassyHarare on Facebook, MDC North America and MDC UK and Ireland, just to name a few, have been urging the Zimbabwean Junta to reveal locate the three women.
To find out more or to join ZHRO please do not hesitate to e-mail via our contact page
For the Latest Vigil Pictures check:
https://www.flickr.com/photos/zhro-uk/albums
Events and Notices
Next date of the next Wednesday ZHRO London Vigil will be announced soon.
Facebook pages:-
https://m.facebook.com/zhrocharity/
https://m.facebook.com/zhrobranch/
https://m.facebook.com/ZHRO100kmWalks/
https://m.facebook.com/Take2Zimbabwe/
Twitter page:-
https://mobile.twitter.com/ZHRO_Zimbabwe/
YouTube page:-
https://www.youtube.com/channel/UCKqcf62teUC2QNmv3dd6yOg//
Wednesday Vigil Blog:-
https://zhro.zimvigil.org/