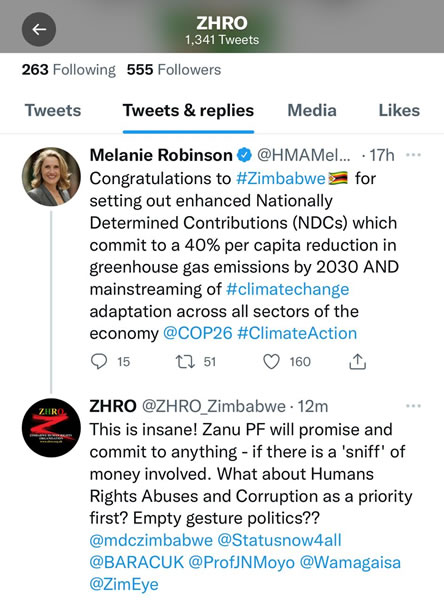 If ever there were proof positive that the whole climate agenda is one massive Governmental {World Governmental} inspired 'tax-based' confidence trick, then the spectacle of Zimbabwe joining the fray says it all. Zimbabwe President is visiting COP26 Glasgow 31st October -12th November 2021.

Zimbabwe since "Independence" in 1980, has been ruled with a fist of iron, in an iron glove by Robert Mugabe up till 2017, and now by his violent henchman Emmerson Dambudzo Mnanagawa. No infrastructure has seen any useful form of maintenance since 1980 - looting these funds has far more "appeal" to those in power.

Human Rights? - forget it. Soldiers shooting citizens - check; Abduction of opposition members - check; Torture as a means of control - check [and just for good measure Zimbabwe is one of only a handful of Nations who have NOT signed-up for the "Convention Against Torture"]; State sanctioned corruption - check; Looting of funds for Hospitals and Medical Centres - check; State Controlled Media [TV, Newspapers, Radio] - check; They even have a "spokesperson" to gloss over all the failures, lies and corruption - Nick Mangwana [Mangwana means "tomorrow" in the Shona language]. Oh yes, and Vote Rigging, Voter Intimidation etc, you name it - check:

For Zimbabwe to be lauded by the UK Embassy in Harare [See Tweet, right dated 15th September 2021], and a similar report by Reuters [25th September 2021, below] to be at the fore front of the climate initiatives, really sticks in the throat. The quote [from a Zanu PF source] is breathtakingly ironic: "fully conditional on affordable international financial support, investment, technology development and transfer and capacity development"

This reeks of "show me the MONEY! Show me the MONEY! On past performance none of these empty, gesture political statements will benefit Zimbabwe - but these naively dispatched funds will enrich those within the elite of the Zanu PF Junta!

Unbelievable - who is "promoting" this Junta? BUT IF YOU OPPOSE THIS OUTRAGE [OF INVITING MNANGAGWA AND up to 70 ZANU PF] to COP26 -SIGN OUR PETITION AT THIS LINK

Sept 25 2021(Reuters) - Zimbabwe has adopted a more ambitious target for emissions reduction ahead of a United Nations climate conference in November, the country's new climate change plan showed. https://www.reuters.com/world/africa/zimbabwe-bolsters-emissions-targets-ahead-climate-summit-2021-09-25/ The southern African country is now committed to a 40% drop in greenhouse gas emissions by 2030 across all sectors of the economy, compared to a "business as usual" scenario in which emission reduction policies are not implemented. Zimbabwe had previously committed to a 33% emissions reduction in its first Nationally Determined Contribution (NDC) in 2017. NDCs are non-binding plans for climate action submitted by countries since the Paris Agreement of 2016. The new target is for Zimbabwe's total greenhouse gas emissions to be curbed to 44.7 million tonnes of carbon dioxide equivalent (Mt CO2e) by 2030. If no action is taken emissions are projected to hit 75.4 Mt CO2e by then. Emissions in 2017 were 35.84 Mt CO2e, according to the NDC's most recent national-level estimate. The biggest source of Zimbabwe's greenhouse gas emissions is the agriculture and forestry sector, with the energy sector ranking second. Thermal power generation is the main driver of energy sector emissions. Zimbabwe's mitigation measures include creating 500,000 more hectares of forest land by 2025, adding 2,098 megawatts of capacity through microgrids by 2028, and expanding solar power capacity. Zimbabwe has separately committed to increasing electricity and coal supply to the iron and steel sectors, though, which will add to emissions. The NDC did not mention plans to curb coal mining or coal-fired power.

In a plea to the international community, Zimbabwe said compliance with its new targets is "fully conditional on affordable international financial support, investment, technology development and transfer and capacity development". The 26th United Nations Climate Change (COP26) conference is scheduled to take place in Glasgow, Scotland, from October 31 to November 12.

Reporting by Helen Reid Source as Web Link above