On Wednesday the 10th of November a rumour started to circulate;

Patson Muzuwa received a phone call from one Masimba Muvaza, who made the assertion that an article will appear in the Herald [Zimbabwe - Zanu PF supporting Newspaper], written by him, with the subject being myself.

I jokingly penned this piece that afternoon. In fact, I had a missed phone call from Mavaza myself! But knowing that he is a poor-man’s Zanu PF CIO and failed Zanu PF UK member, I let it slide.

“Rumour has it that The Herald in Zimbabwe, will publish an article by Masimba Mavaza, claiming that I paid all the protesters in Glasgow £300 each [if only that were true!!]. Oh and also, I am sleeping with several different Zimbabwean women!! And that's why so many protesters were there!! This is pure distraction, designed to take our "eye off the prize" [Zanu PF must Go!]. It's also so Mavaza can try and re-claim his position within Zanu PF, due to him acknowledging Chief Ndiweni by name and title in an interview last night on Zim Eye!!

Retuning to the task in hand I continued with: 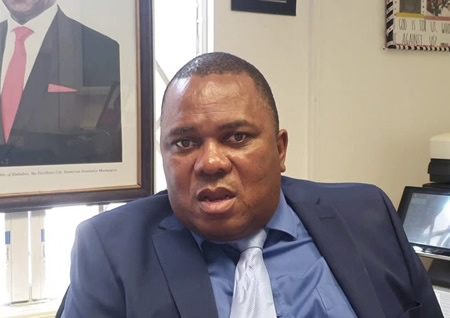 So we will deliver our petition to 10 Downing Street tomorrow - and at 14:15 tomorrow a new article will appear on the https://zhro.org.uk/human-rights-uk/  with direct access to the written petition so please share when that arrives

We duly handed over the 36 page written evidence based petition on Thursday 11th November 2021 at 14:00 as planned. The 50 plus group of Zimbabweans who joined us acted together, with ZHRO, ROHR Zimbabwe, MDCA and ZAPU members acting in unison on this particular project. As we did in Glasgow on the 1st and 2nd November 2021.-

The post event write up is here: Petition to 10 Downing Street on 11th November 2021

On this page there is a live link to the actual petition in PDF format: for ease of access that link is here: COP26 Follow-Up and Zanu PF UK/Mnangagwa's Criminality Petition - 11th November 2021

The Petition is a hard-hitting exposé of the crimes of Emmerson D Mnangagwa and the problem of ZANU PF, the party he currently heads. The Petition also cites ZANU PF UK and Europe [an organisation based in the Midlands of the UK], but also Zanu PF USA and Zanu PF Russia.

We went on to speculate that the possibilities for Money Laundering out of Zimbabwe, to Russia and the UK needs to be investigated. We also cited the covert intimidation meted out on some of those who took part in the highly successful COP26 [Glasgow] protests, by this UK based group, and we referred to them as a “Terrorist Cell”. Given the criminal damage and threats received – we can only assume that they are either taking instructions from the party in Zimbabwe or acting ‘under their own initiative’ – either way these behaviours are completely unacceptable in the UK. 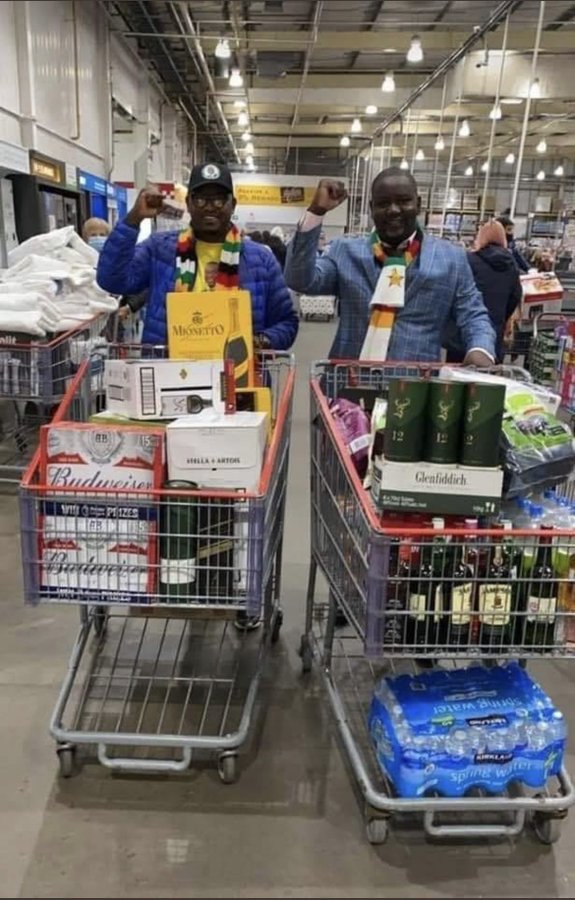 We did a write up of the protests in Glasgow regarding the inappropriate behaviours by Zanu PF UK and Zimbabwe, which has regrettably made Zimbabwe a laughingstock.

seen here: How many Zimbabwean Ministers and Zanu PF Climate Scientists does it take to change a Lightbulb

On to the Offensive Article by Masimba Mavaza

We now think that Mavaza “decided” to retaliate on behalf of Zanu PF UK, to our evidence-based assertions as described and shown above [the full items are available using the live web-Links].

However, things have now taken a turn for the worse, with a direct attack on the professionalism, honesty and integrity of myself as the founder of ZHRO, in an error-strewn article penned by the so called “Doctor” Masimba Mavaza! Published on Saturday 13th November 2021 around 7:30am.

I will cite some of the more preposterous passages, for readers to review, and consider if they already know me. Furthermore, as one of the key organisers for previous petitions, handed in to 10 Downing Street, The “Walk for Freedom” annual 105km challenge [ Walk for Freedom - 105km ] and the Glasgow COP26 protests against the Zanu PF ‘Booze Cruise’ Delegation, this assault upon my character and professionalism cannot go unanswered. As an example of the spread of this written ‘effluent’, colleagues at my partner’s work have asked her about this article. It seems that bad news travels fastest!

None of Mavaza’s assertions are correct, his accusations of me as a sexual predator are without any foundation, as is the number of women in the diaspora that I have supposedly slept with [from 9 to “Hundreds”]- within this text. The allegations of fraud are contemptable considering the amount of money that has been donated to ZHRO by myself, for the asylum legal bills of many of the members.

Again, as he tried to provoke the protesters in Glasgow, he is making accusations that the women are “undocumented” [Item 14 above see image of him attempting to intimidate]. 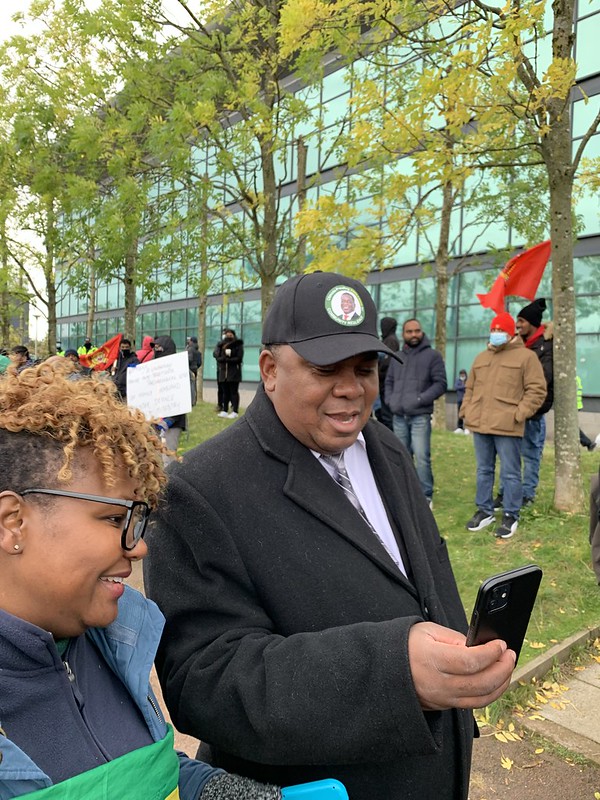 This article is designed with the politics of Zanu PF in mind, with the self-promotion of Mavaza himself and his need to ingratiate himself within Zanu PF and Zanu PF UK.

Of course, Mavaza is in a difficult position himself – a failed lawyer with highly suspect qualifications out of Zimbabwe, the poor clients he has defrauded within the diaspora. To his failure to become a Magistrate in Corby in 2011, due to failure to disclose his fraud charges in Zimbabwe.

I can only offer pity to Masimba Mavaza, to have only Zanu PF UK to toady up to in order to gain some sort of ‘relevance’. Many of his articles on other platforms such as Bulawayo 24 and the Herald in Zimbabwe, are full of untruths, and lies. He is trying to fawn to the regime he thinks will be his financial saviour – but in this, he is even more mistaken.

Mavaza is trying to attain a ‘high moral ground’ from a political party like Zanu PF that has no moral compass at all. Vice President Kembo Mohadi resigned amid volumes of sex allegations with women all over the country and some were only teenage girls. This was in the midst of the legal case where he chased his ex-wife, while waving an axe in the air trying to chop her up. These events were all reported in the local press.

The remaining Vice President Constantino Chiwenga has treated his ex-wife, Mary so appallingly it beggar’s belief and would set gender equality back decades in the country.

The President, Emmerson Mnangagwa, has been dogged in the media and corridors as to how many children he has, the figures expressed are in their thirties, by as many women.

We then have the Administrator of the Party, Orbet Mpofu who is viewed as Mr Corruption, Mr Big Fish, amongst many Zimbabweans, who also has a questionable record with women. These are the four highest positions in Zanu PF. A party with no moral compass. A party Mavaza is trying to ingratiate himself to, from the gutter. A party that has shown little regard to the wellbeing of women.

However, what Misamba Mavaza has done is to prove that Zanu PF UK are a here in the UK to continue the intimidation, and oppression of the main party in Zimbabwe. They are also here to lobby the UK Government regarding how wonderfully Zanu PF are doing in Zimbabwe, and that all the feedback that is happening about the human rights violations, the corruption, mismanagement and incompetence in Zimbabwe have been “exaggerated” by ‘political opponents’. Or the fault lies with the Sanctions, as promoted by the 8 Pastor delegation to the Archbishop of Canterbury in the last few days.

Zanu PF UK, Europe and Russia, may be handling gold, diamonds and laundering money – although this needs to be further investigated by the UK Terror and Fraud Squads, plus Interpol too. The clues are in the smuggling of Gold Bullion to Dubai, recently exposed undertaken by a relative of Mnangagwa himself.

As a point of interest, the website upon which this scurrilous article appears uses various web-based analytics and monetising strategies. These organisations are being informed of the inappropriate and under-hand usage of their systems.