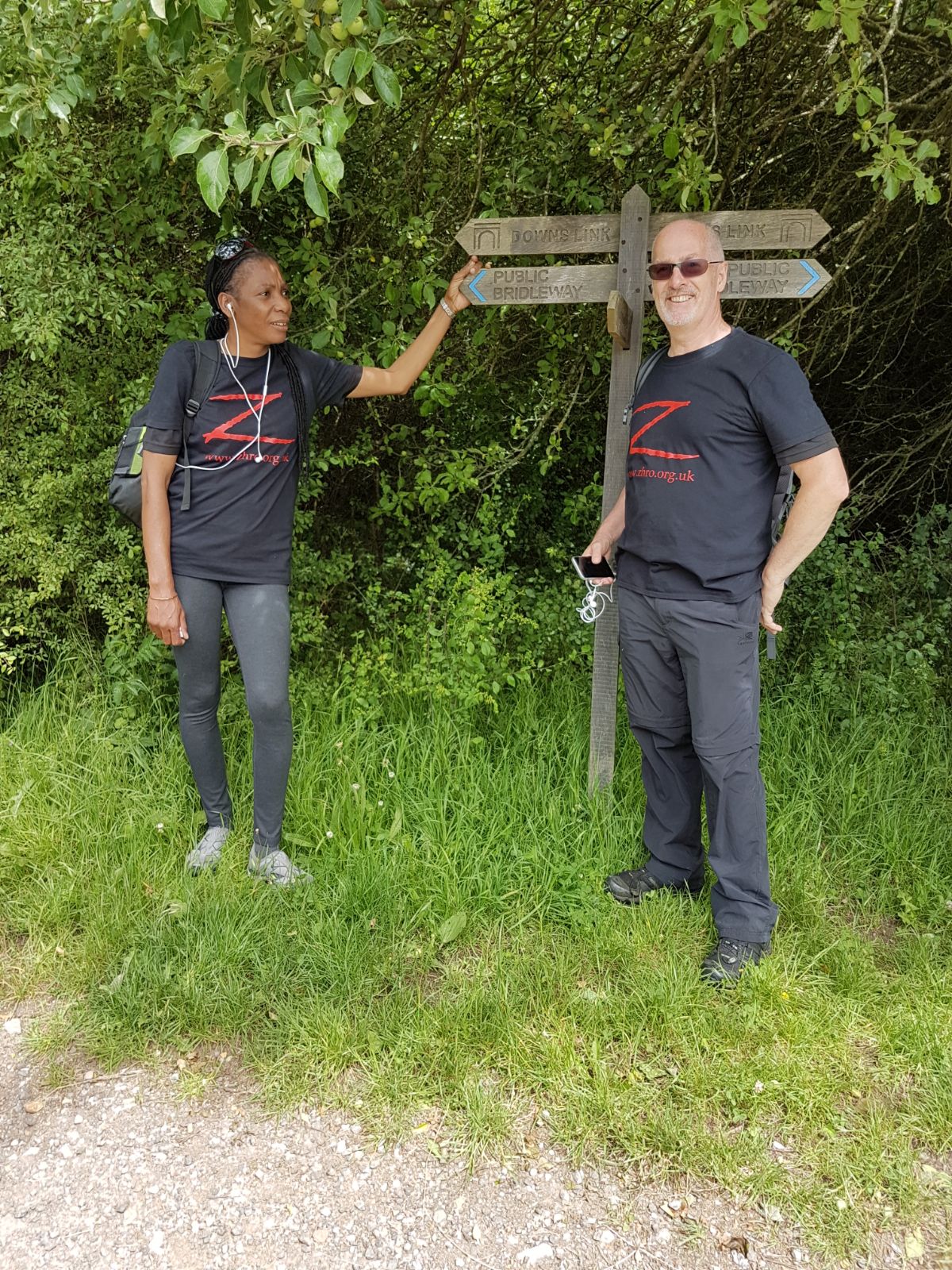 From May to August 2016 two dedicated Zimbabwe Diasporan/supporter [Rashiwe Bayisayi and John Burke] walked over 100 miles to find a suitable route from Brighton Pier to the Zimbabwe Embassy, 429 The Strand, London. Then they walked the 68 Miles with the other walkers on this innovative Zimbabwean March.

Born out of an idea floated by Rashiwe Bayisayi, following the play "After Independence" written by May Sumbwanyambe - the walk represent the struggle to walk back HOME

In 2017 -  The duo have walked a further 120 miles to refine the new route to London, then plan on the further 60+ miles on Friday 18th August to Saturday 19th August, finishing at the ZimFest - Which ZHRO have sponsored .

Again, starting at Brighton Pier, assembling from 6:00am and leaving promptly at 7:00am. Heading North East and aiming for the "Devil's Dyke" 12 km away and uphill to the top of the South Downs. At the top of Devil's Dyke will be a short but, unique performance by Silvanos Mudzvova {ZHRO mmber and exposer of exploiters here in the UK and elsewhere}.

This year 2018 we will be repeating the same route, Brighton Pier to Kempton park, via Guildford. Training for this test of endurance will beging in March right up to August - when participants will need to be comfortable with 30km walks.

From there the steep descent to the village of Fulking then accross country to Henfield. There will be a rest break to take onboard carbohyrate rich snacks for continued energy. At Henfield we pick up the "Downs Link" {a path formed from the route of an old railway line - closed in the 1960's, but first opened around 1885}. This takes the intrepid walkers via Partridge Green and Southwater to Christ's Hospital some 37km along the route. A meal of meat and sadza will welcome tired legs, and all the walkers - as cooked by Eddie Murota and friends.

By now darkness will be falling and on go the head torches for the next 35km of so until dawn, by which time Guildford would be behind the walkers with around 35km to go. Just before Guildford and for most of the route will be next to the River Wey Navigation, walking past locks and barges on this scenic stretch of waterways. Using the towpath and footbridges we will criss-cross this waterway. 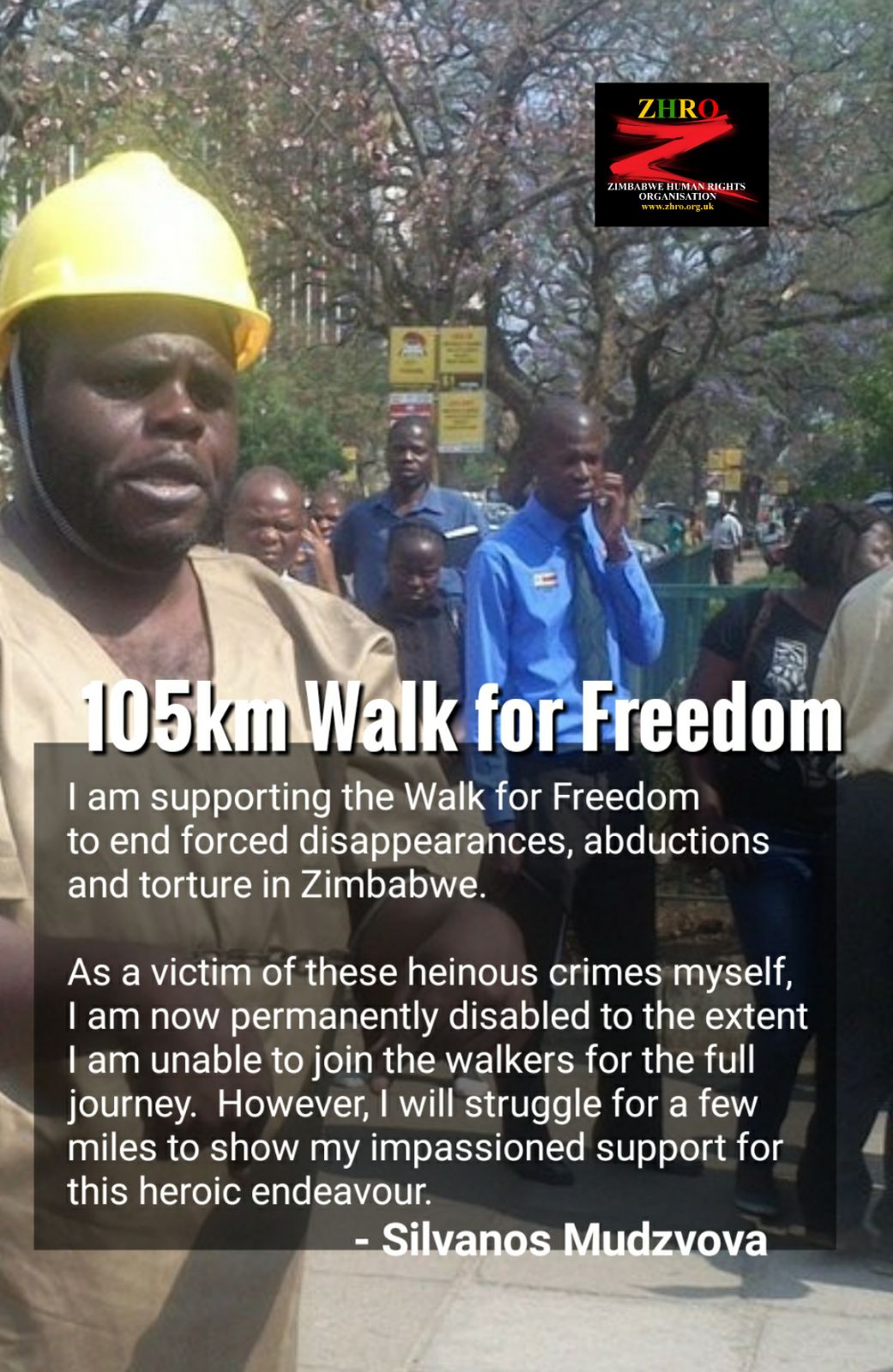 Passing under the thundering M25 in the early hours of the morning near to Byfleet and New Haw Railway Station, but still next to the Wey Navigation will next see us cross the Thames Locks.Pressing on through the fringes of Weybridge, and into the Western side of the River Thames. As we will approach Sunbury-on-Thames we are nearly at the finish.

Other ZHRO members will be waiting at our stand at the Zimfest to cheer us home, exhausted after 105 km.

And why this effort? To raise funds to help Zimbabwean Diasporans with various projects, from re-entering work, education and even legal support.

The diaspora are mainly disadvantaged in so many ways, from the minute they leave Zimbabwe to justifying their fears of a return to an overtly oppressive and cynical regime. Zimbabwe is [still] in crisis, as it has been for most of the 37 years of Mugabe's rule, leading the infamous Zanu PF 'one-party' State.

Walk for Freedom is what the walk is about, Freedom from tyranny, Freedom from Intimidation, Freedom from torture and Freedom from overt vote rigging! Zimbabwe is the least democratic nation, on a par with Venezulia - with almost identical economic stagnation [or stag-flation - rising prices with a collapsing economy] - all the exclusive domain of the ruling Zanu PF dictatorship.