Thursday the 21st of October 2021: 429 The Strand, LONDON. Outside The Zimbabwe Embassy - it was sunny. 60 plus Zimbabweans and those who felt the invitation to a dictator in Zimbabwe to attend COP26 was a step too far [even if the UK is the Host and Alok Sharma has been made this year's "President"] 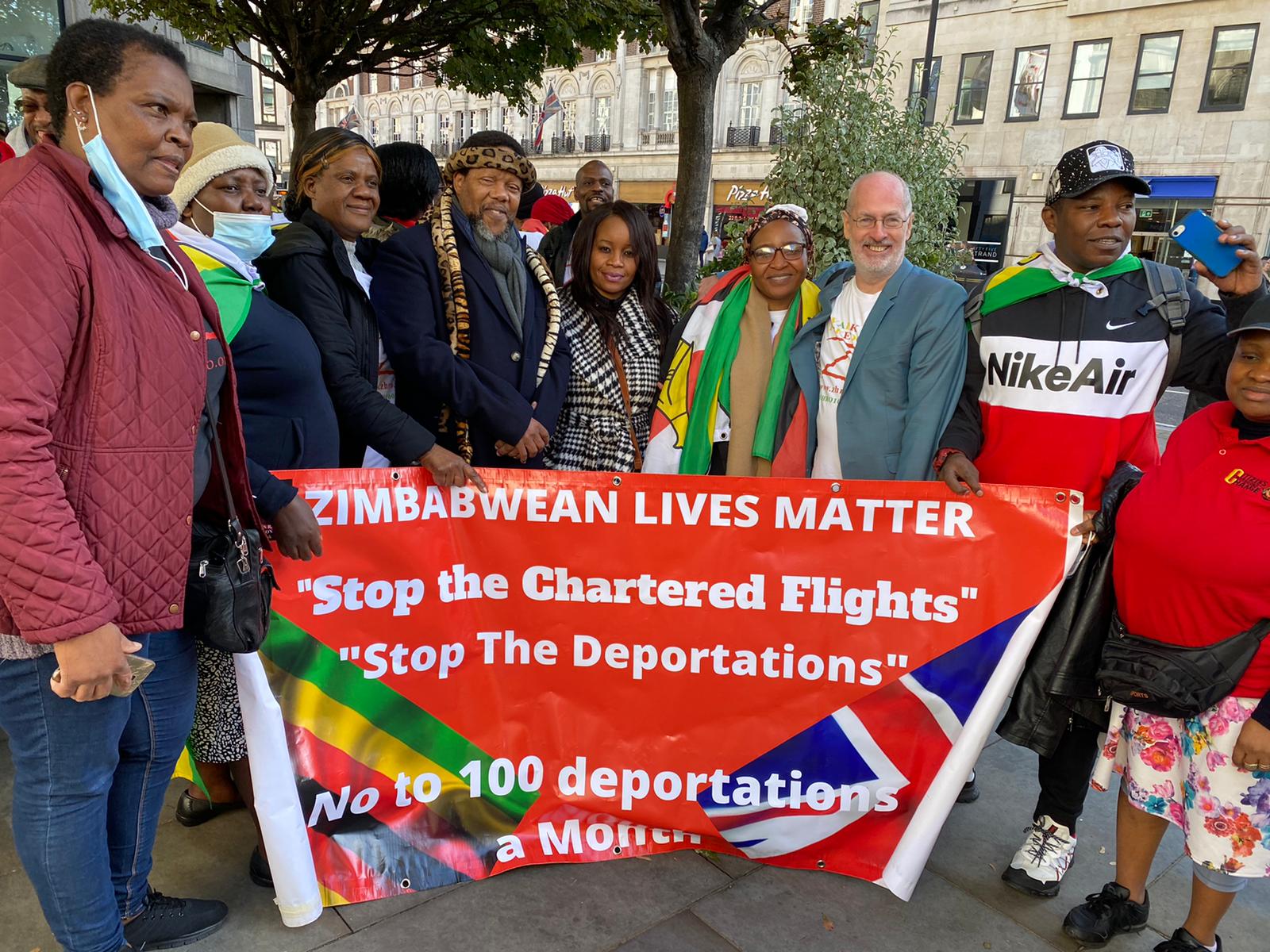 UPDATE: 22nd October 2021: Click below to see a full copy of the petition to 10 Downing Street. In addition we were fortunate enough to have the support of Chief NhlaNhla Yamangwe NDIWENI join with us for this cause. He gave an excellent interview outside the Zimbabwe Embassy at noon on the 21st October, just before we set off for 10 Downing Street. His understanding of the Climatic Impacts upon Zimbabwe, and the current Environmental degradation being carried out under the [apparent permission] of the incumbent Zanu PF "Ruling" Party [as opposed to a Government] [of the people]

Link to our PETITION to 10 Downing Street, Questioning the decision to allow [illegal] President Mnangagwa and his 50 "Security Team" into the UK. The petition was a joint effort by the UK and Ireland representatives of Movement for Democratic Change Alliance [MDCA]– the de facto opposition party in Zimbabwe [no matter what the Zanu PF regime tells us]; Zimbabwe African People's Union [ZAPU] - founded in 1961 until 1980. and it was relaunched in 2008; Restoration of Human Rights Zimbabwe [ROHR] in the UK – A Human Rights Group in Zimbabwe; and ZHRO. Contributors were as follows: Ms Vimbai Mamombe MDCA; Model Pamire MDCA; Leo Ndlovu ZAPU; John Burke ZHRO and Panyika Karimanzira ROHR Zimbabwe. In addition many others helped in the formulation and final editing.

In addition, Chief F Nhla Nhla Yemangwe Ndiweni from the Ntabazinduna Region. Representing the Ndebele nation with regard to Customs Traditions Practises and norms from the Traditional Houses. ie the whole Southern Half of Zimbabwe was also a signatory to this document.

Link to the Interview by Chief Ndiweni outside the Zimbabwean Embassy at noon on the 21st October 2021. The Chief has a good understanding of the Climate and Environmental issues facing Zimbabwe. It would appear a much better grasp than the incumbent Zanu PF 'Lootocracy' has!!

We all strolled from the Strand, to Trafalgar Square, to Whitehall and then camped outside 10 Downing Street. The atmosphere was great We even "compared notes" with fellow protesters IPOB UKwho were there to make some noise outside 10 Downing Street and then onto the Foreign and Commonwealth Office [round the Corner]. Thanks to Mr and Mrs Mike and Mercy Statter for the background. 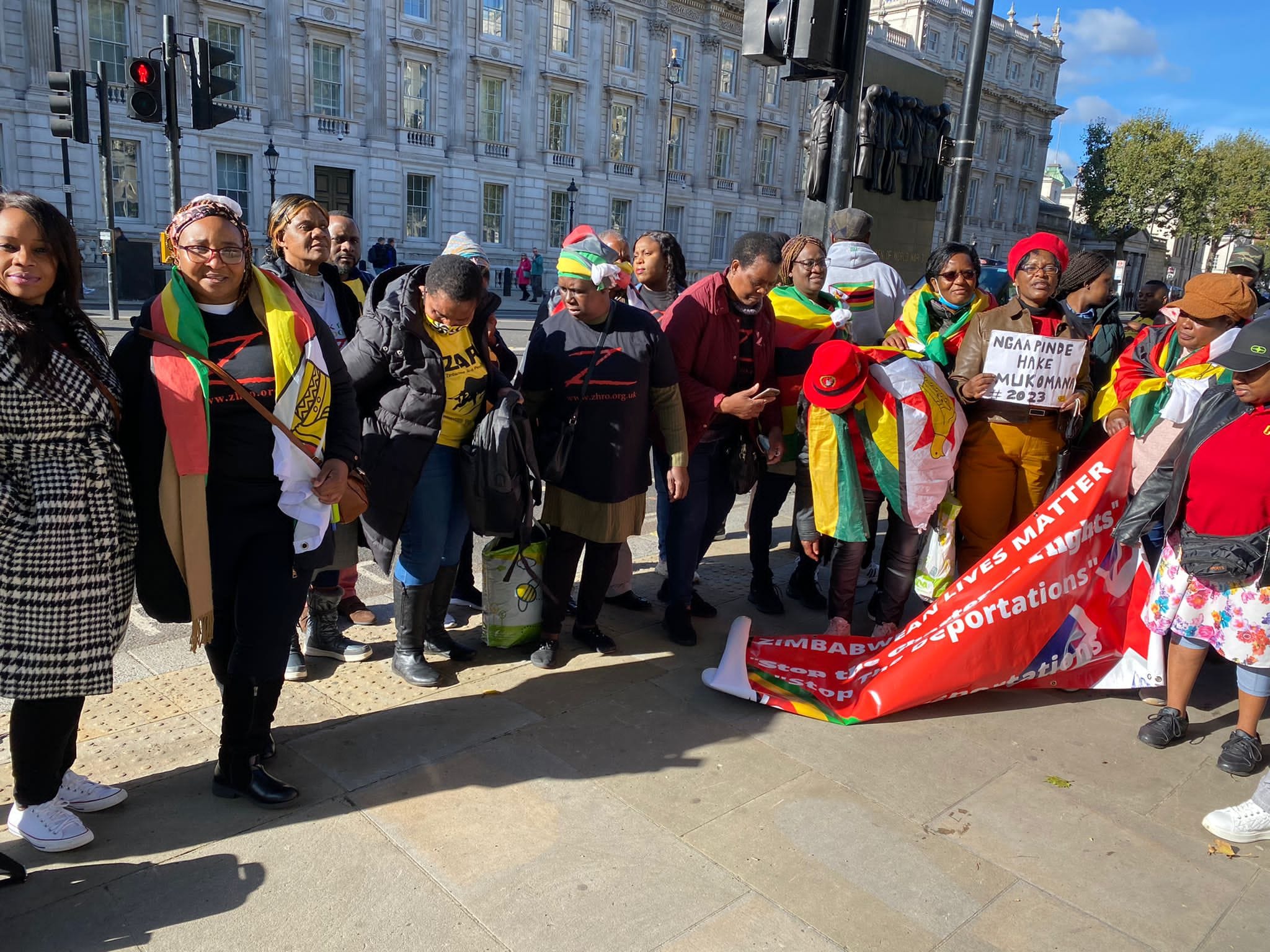 We took photos and debated the issues in Zimbabwe. We had the TV teams from Al Jezera with us who interviewed several of the Zimbabwean protestors, including Chief Ndiweni and Beverley Mutandiro.

Those 6 "Petitioners" were led at 14:00 [2:00pm] over to the Gates of number 10 bang on time. Photos inside the gates, will be seen shortly. The Petitioners were Sipilien Birani, Malvern Dengu, Shamiso Moyo, Tryness Ncube, Model Pamire and Zakhele Maphosa.

Also a big thank you to Rashiwe Bayisayi, Sarah Bayisayi, Abygail Makope, Ebson Chigwedere and Phillip Mahlahla for drumming and leading the songs. Thank also to Phillip for carrying the drum from the South Coast [by train!]. Also a note that Moses Mbano actually started the singing and dancing outside the Embassy - but it may have been that he was a little cold, having arrived from Newcastle at a 08:45am!

Thanks also to the two guys from Al Jezara TV who filmed the whole event from 11:00 at the Embassy and until 15:00 outside number 10 Downing Street. Impressed with their dedication.

We have formally sought permission to deliver a written petition to 10 Downing Street, On the 21st October at 14:00; This petition will cover;

We need to know which other groups, Lords. MP's or Individuals who are sympathetic to this petition and who are willing to lend their name(s) to this cause.

See our article regarding this Climate injustice

Visit our main Facebook Page to see the Event on the 21st October 2021 Outside the Zimbabwe Embassy, London, and then at 10 Downing Street, LONDON at 14:00

Why are Zanu PF UK Here?

The following "fluff" piece [of blatant propaganda] was penned by the self professed Dr Masimba Mavaza - a Zanu PF apologist here in the UK.

His reporting of the call for "unity" by this UK cabal, is of particular concern, considering the blatant and often inflicted violence on MDCA members in Zimbabwe. To expect those who have fled Zimbabwe due to oppression and violence, to forgive and forget is disingenuous to say the least. So the question remains, "Why and How are Zanu PF UK allowed to be in the UK when they are clearly linked to the terrorist host organisation in Zimbabwe. Are they here to do Zanu PF's 'laundry'? Are they here to lobby the Home office and the Foreign and Commonwealth Office to 'paper-over' the oppression and corruption in Zimbabwe? Are they here simply to cause confusion and to infiltrate the legitimate diaspora - with the Zanu PF Junta's violent agenda?

These questions need answers, these members of Zanu PF UK need investigation. Their corporate shareholdings and directorships need to be investigated with a view to pin-pointing their "source of funds". We have started our dossier already. 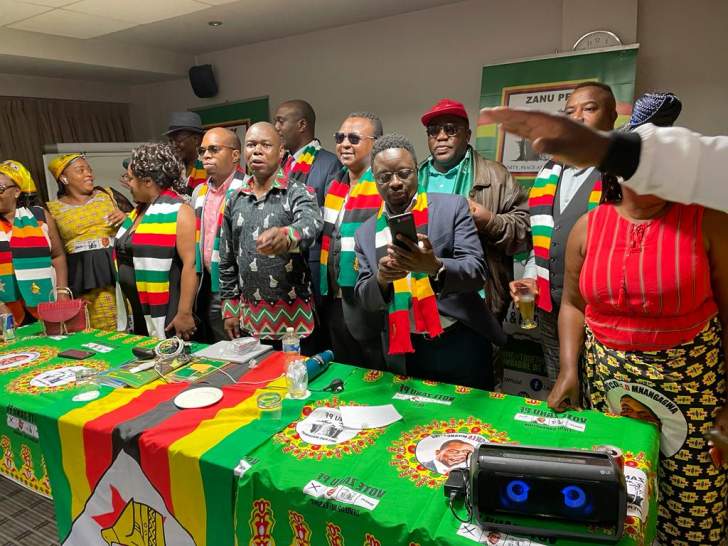 ZANU PF UK AND ENGLAND [Europe] had their first post-COVID general meeting on Saturday in Northampton, [Northamptonshire,] Midlands in England. The meeting came [about] when [due to] the President of Zimbabwe, cde Emerson Dambudzo MNANGAGWA is marked to visit the United Kingdom in October soon after the ZANU PF 19th Conference in Bindura. [to speak at the COP26 Climate Event in Glasgow - 30th October - 11th November 2021]

In ZANU PF when a chairperson of the party in any portfolio dies the next senior position holder becomes the acting chairperson. In the case of ZANU PF UK cde ZAVARE as the secretary of Administration is a lawfully acting chairperson. ZANU PF UK has been rocked by bickering of positions and looks divided with cde Marshal Gore who is the deputy secretary of administration claiming to be the legitimate Chairman. Cde Gore even though not supported by the ZANU PF constitution is being supported by few heavy weights he claims are at the Head Office and few government officials. Cde Gore did not attend the general meeting which was attended by hundreds[??] of people.

We are less than 7 days away and the excitement is building. [At the time of writing on Saturday 14th August 2021]
The weather forecasts (so far) look good - cloudy - but no rain - ideal for a long walk. Keeping cool is part of the strategy - especially one's feet! Plenty of changes of socks and talcum powder.

This year we must welcome Daisy Motlogwa and her husband, Moses, as he was newly released from detention only this week. Daisy will be driving down from Newcastle to Brighton [346 miles distance and expected to take 5 hours and 30 minutes] on the Friday preceding the "Walk for Freedom" [Friday 20th August 2021]. She will be arriving with her 3 children too, and will stay overnight at a local activist's house in adjacent Hove.

Plenty of “local supporters” [Brighton and Hove residents] will be welcome, and some could join us to the Devil’s Dyke Public House - there we stop for photos and a song or two!!
The Walk for Freedom is a peaceful 'protest' walk that is used by ZHRO, to raise awareness to the British public of the plight of Zimbabweans, who are suffering under the brutal rule of the Zimbabwe African National Union Patriotic Front (ZANU PF) Political Party. The Walk For Freedom was the Idea of Rashiwe Bayisayi [in 2016], who has already completes four such walks and this year she will start her fifth!.
Ben Tsikwa, Siplilen Birani, and Temba Ncube became the first male ZHRO members ever, to successfully complete the whole walk from Brighton to London.
“Zimbabweans are still suffering both in Zimbabwe and in the Diaspora.  So we’ve got a road to go,” said Rashiwe Bayisayi last year when being interviewed.  Parts of the ZHRO Vision 2021 walk will be on Twitter, Our Blogs and on ZHRO Facebook Live with more interviews are planned with those that completed the walk.
Download Ordinance Survey APP " OSOnline" to follow this mapped route, as stage 1 of the Walk for Freedom. Route Navigation over public footpaths from Brighton Pier to Christ's Hospital Railway Station 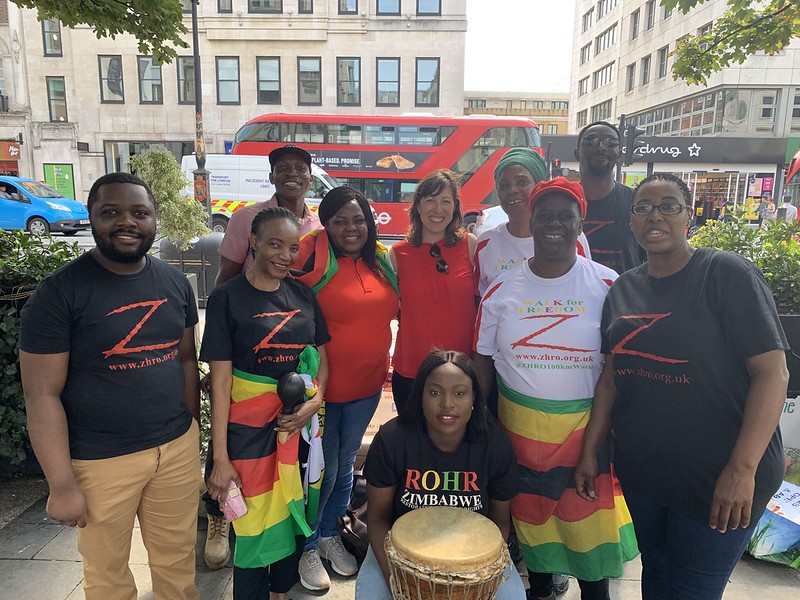