Review of the Day 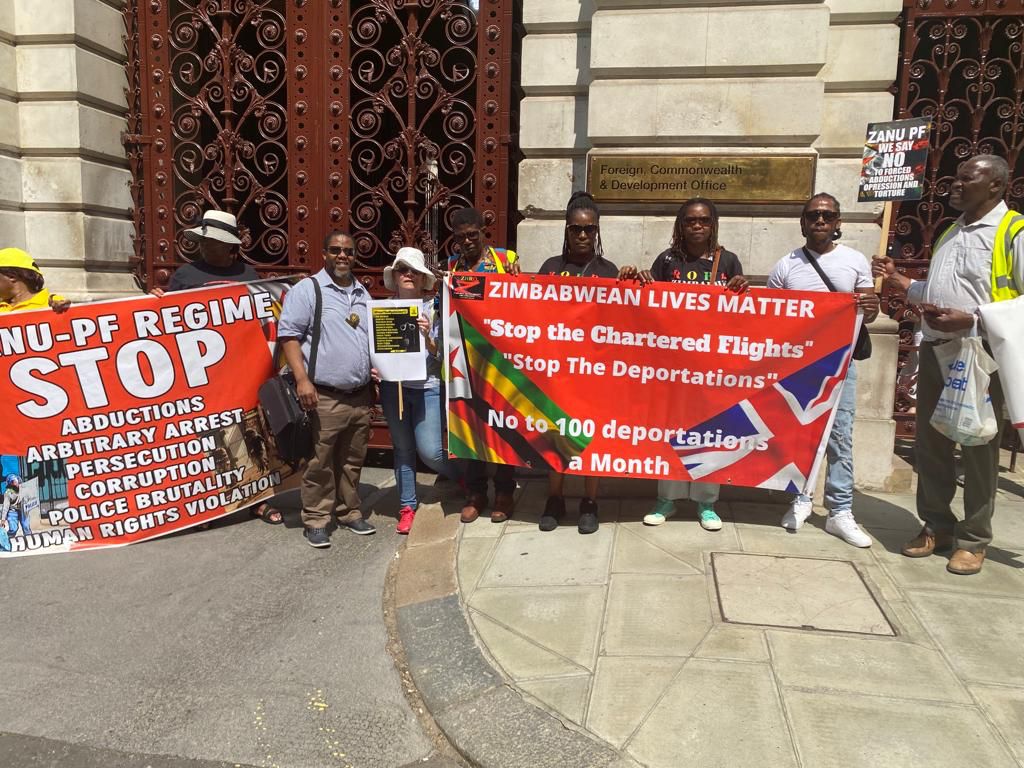 "Everyone has the right to take part in the government of his country, directly or through freely chosen representatives. . . . The will of the people shall be the basis of the authority of government; this will shall be expressed in periodic and genuine elections which shall be by universal and equal suffrage and shall be held by secret vote or by equivalent free voting procedures."
Article 21, Universal Declaration of Human Rights, 1948

The above ethos carried us forward. With delays and cancellations on the British Railways, many activists were thwarted before they got to Trafalgar Square - those who had books buses [cheaper, but slower] proved to be most successful. Activists arrived and signed the attendance register from Glasgow, Bristol, Nottingham, Manchester, Doncaster, Leicester, Wolverhampton, and Sheffield to name a few. Those form London were there too, also from the outlying counties.

The weather was good, temperatures had abated to 25oC from the 39oC the day before. It was sunny!

We departed Trafalgar Square a little behind schedule to allow those who had experienced travel delays - so we set off down Whitehall. Past the chaos of 10 Downing Street, where the battle to replace the devious and untrustworthy Boris Johnson was in full swing! Asking the policemen outside "How is the Election Going" - they replied "we haven't a clue"

Just around the corner is the massive Foreign Office Building. We entered King Charles Street to gather outside the elaborate gates to the Foreign Commonwealth and Development Office [FCDO] see small photo.

We were greeted by two managers to receive the petition [signed by Chief Ndiweni [My Right to Vote], Vongayi Mufara [ROHR] and John Burke [ZHRO]. They listened attentively to our suggestions and agreed to deliver it to the Africa Desk/Minister for Africa Office. So first port of call Petition delivered.

Onwards: the walk to the Senegal Embassy entailed a total of 3.84 miles (6.1km) - we carried on through King Charles Street and into St James' Park - with the cooling effects of the trees very much appreciated. At the same time several of our group were attempting to coordinate with those who were elsewhere within London, where we could rendezvous. 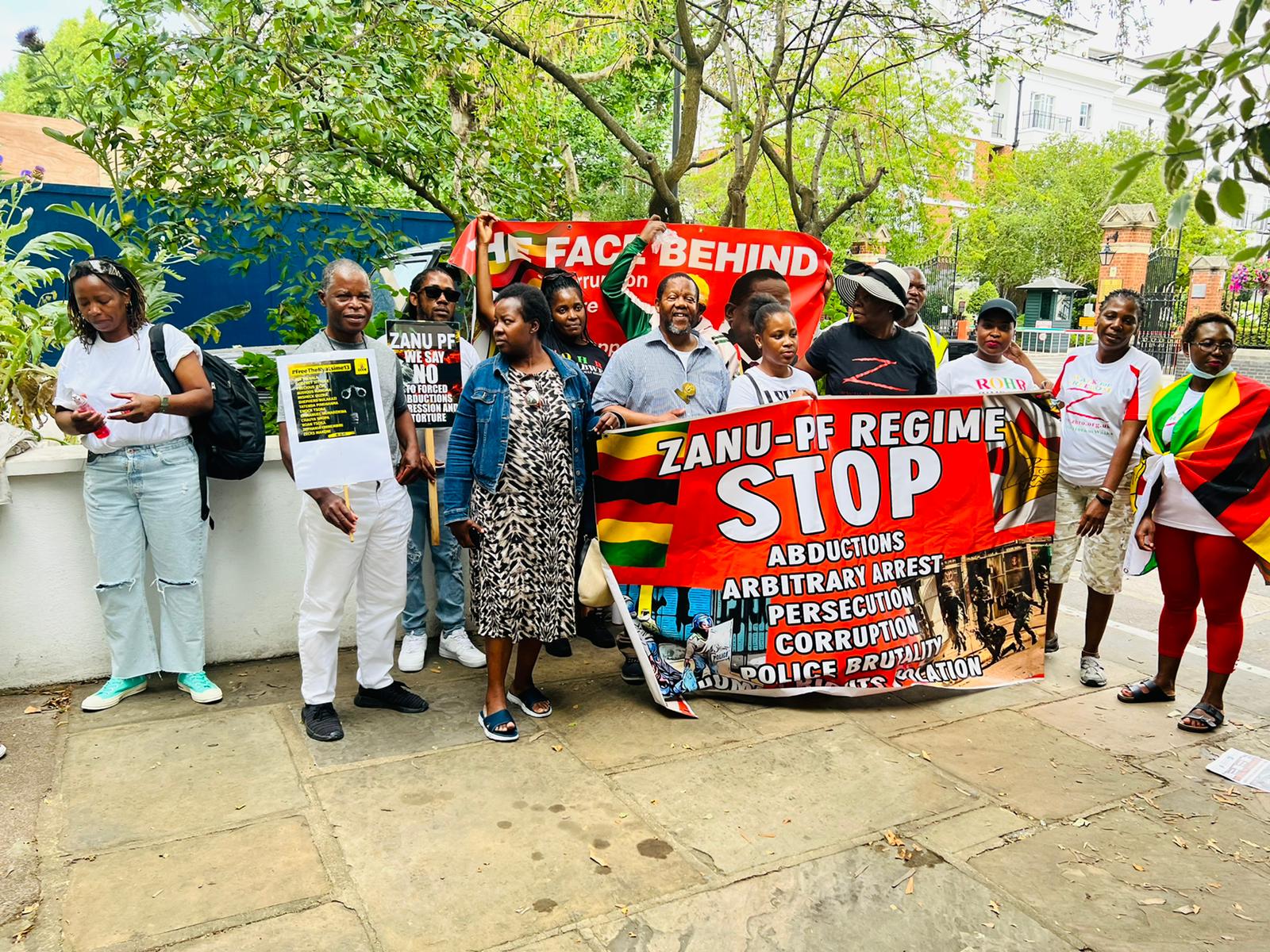 Skirting Buckingham Palace grounds, towards Brompton and headed on towards Kensington And Chelsea. After we had 'pounded' the streets for 90 minutes we arrived at the Senegal Embassy to be greeted by a large group of activists who had made their way there. They had already engaged with the Embassy Staff about the intention to hand over a petition document regarding their President's current position of Chair of the African Union [AU].

We respectfully delivered our second petition of the day. The Senegal Embassy staff were most accommodating. We also were surprised to hear that they were coordinating their own elections for the 31st July. The Zimbabwean activists present were also shocked when those same staff revealed that during National Elections that all Senegal Nationals in the UK attended the Embassy and other Consulates to cast their vote! there is no need to return to Senegal!! Zimbabweans were aghast! This would solve so many issues - if only the Zanu PF military cabal could be honest, and allow free and fair elections - but that's why were are here!

We loitered a little longer at the Senegal Embassy and they were most kind, and offered those in need "use of their facilities".

As Chief Ndiweni had commented here - that "we must build relationships with these other Embassies". the chief also gave an interview with Valarie Karimakwenda [who also did a fine Interview in Glasgow at the COP26 Conference protest in November 2021]. Here is a link to Twitter for this interview: Chief Ndiweni Interview -Senagal Embassy

Now we had to get to the Namibian Consulate at 6 Chandon Street, London W1G 9LU, near the wonderful Langham Hotel and backing onto the BBC Headquarters. This is another 3.5 miles distant! We may have "cheated" but we like to think that we flew there before closing!

We did march down the length of Oxford Street, from Marble Arch to Oxford Circus, then towards the BBC building. We passed by the front of the Langham Hotel and into Chandos Street - the Consulate is in the corner. We saw the flag, and the give-away was the new Merc with a number-plate "1 NAM".

Again we respectfully knocked on their door. We were allowed to submit the petition [as their President hold the Chair of SADC this year. We again physically signed the petition, The Chief, Vongayi and John. The Chief did the official 'handover' at the door of the Embassy. But as anticipated they were a little camera-shy. See Twitter Post at this Moment.

We held up our banners and all the activists discussed the desire to vote at their local Embassy - for a free, fair and inclusive election process - but not likely from the corrupt and devious Zanu PF regime - who only a day of so ago, had Mnangagwa claiming to "rule" past 2023 - [no mention of the more normal concept of "to serve"]. However the subtle pressures being applied by international diplomacy will attempt to ensure that this electoral corruption is kicked out of Zimbabwe.

So now the last port of call on the 20th July was the BBC. A very short walk back past the Langham Hotel had us arrive at the BBC in about 3 minutes flat. The staff were making a documentary about the BBC over the decades and a 1950's Outside Broadcast Unit was on the concourse to the BBC.

We again, respectfully requested to the Nigerian {!} security personnel  as to why we were there. After a little discussion among the other security teams a South African Floor Manager arrived to accept the Petition from Chief Ndiweni and to listen to his pleas regarding free, fair and open elections in 2023 - in spite of the current intimidation being applied onto opposition members and MP's. The Floor Manage assured the Chief that the petition would be given to the BBC Africa Desk See Tweet of that moment here.

We are still reviewing the day, as a lot of ground and discussion were covered by all 24 who attended. Watch out for further updates!

We have also been alerted to the Stockholm, Sweden Petition delivery by our activist over there, Sophia. More will be happening over the coming weeks. The effects of the Petition Extravaganza are ongoing and cumulative.